The decision maker, the coward, and the caveman 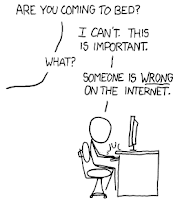 But here is the truth, being balanced means two things :

Both, the guy for and the guy against are very interesting people. They can tell you exactly why they feel what they feel without any fear of political sanction.
Most of the time, these guys know a lot about their respective field, and defends what is feeding their wallet, brain and stomach. You can get a lot from them.
They are both decision makers.

The guy that says it depends... not every times. Is he able to ask you about what information does he needs to make a decision ? If not, it is just a coward, and you can get nothing from him.

Thus now, in my scale, it exists three types of people on the internet :  The decision maker, the coward, and caveman.

PS: despite I call him caveman, there is nothing wrong with him ! :)
Publié par Nicolas Dorier à l'adresse 10:50 AM

Nicolas Dorier
The best course is the one that makes you curious.
The best sofware is the one you do not notice.